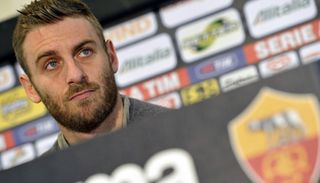 Sunday's match comes around seven weeks after a Serie A meeting between the two neighbours was preceded by violent clashes in the streets of Rome in which several people were stabbed.

"It will be a big party: there are lots of people who want to come to the stadium hoping to celebrate a win but who will leave their weapons and knives at home," De Rossi, who was born in the city and is a key player for Roma, told reporters.

"We know that tension is high and we have to be the first to not go over the top on the pitch because that could spark unwanted incidents," added De Rossi, who was sent off in November's 3-2 derby defeat after punching Lazio midfielder Stefano Mauri in the face.

"Everyone, but above all me being Roman, wants to see maturity from everyone in the city."

The Rome derby is one of the fiercest rivalries in Italian soccer and frequently features violent clashes between fans and police.

Last month, around 200 Lazio fans threw bottles and other objects at officers who responded by firing tear gas and baton-charging supporters as violence broke out in the Ponte Milvio district of Rome, near the Stadio Olimpico, before the derby.

The kick-off for Sunday's match at the clubs' shared Stadio Olimpico, which offers both teams a last chance to qualify for the Europa League, was brought forward from 9pm local time to 6pm to reduce the risk of trouble and 2,000 police will be on duty.