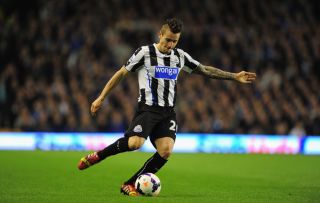 The 28-year-old defender is one of nine Frenchmen in Alan Pardew's 25-man Premier League squad, with six of those featuring against Cardiff City last weekend.

But Debuchy has moved to play down suggestions that there are cliques within the squad, revealing that all of the players get on as well behind the scenes as they do on the pitch.

"It's true that in the dressing room we talk a lot in French," he said.

"We have a big group of French players. But we avoid always staying together.

"And we aim to speak in English with the other foreign players and the English ones. But it's good. There are no issues."

Newcastle are currently 11th in the Premier League table and will continue their campaign with a clash against Liverpool on October 19.