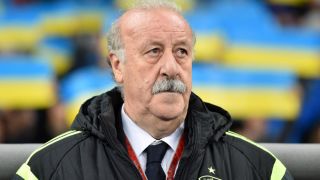 Vicente del Bosque has hinted that he could continue as Spain head coach beyond Euro 2016.

The 65-year-old has been in charge of the national team since 2008, guiding them to their first World Cup in 2010 and a second successive European Championship in 2012.

Del Bosque's contract expires on July 31, after the Euros in France, and he suggested in the past that the tournament would be his last.

But the former Real Madrid coach refused to rule out extending his stay.

"We'll talk about my future as and when. I'll always try to help Spanish football wherever I am," Del Bosque told Radio Marca.

"Of course, I'll be there for whatever they need. Whatever I decide will in no way harm the federation or the national team."

Del Bosque also said he is in no rush to decide which forwards he will take with him to France, with veteran Athletic Bilbao striker Aritz Aduriz set to get his chance to add to his solitary cap in the upcoming friendlies against Italy and Romania.

"We have two months ahead of us to decide which strikers make the squad. We will do whatever is best for the Spanish national team," he said.

"The idea is not to give 180 minutes to any player. With Aduriz we will ask him to do what he's been doing at Athletic [Bilbao]."