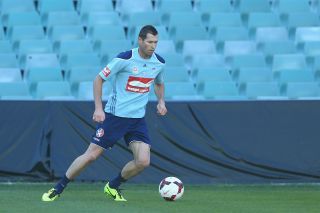 Emerton missed the opening-round clash against Newcastle with back spasms before returning in last week's 4-0 loss to Brisbane.

He has been named in Frank Farina's extended squad alongside skipper Del Piero who is battling a calf injury.

Farina all but ruled out the captain on Thursday but Emerton revealed the Italian is still desperate to play and will undergo a fitness test on Saturday morning.

"We'll wait and see, he's doing everything he can to get himself fit and he wants to play just as much as everybody, so we'll see how we go but obviously it's a long season so we have to look to the future as well," Emerton told Sky Sports Radio on Friday.

"We don't want him to injure himself any further and miss more games but I think they'll make that assessment possibly tomorrow morning before the game.

"I'm in a similar scenario, I think tomorrow there'll be a fitness test and then we'll make the decision as to whether myself and Del Piero as well will play.

"I'd say I'm 50-50 at this stage ... the back's not 100 percent at this stage but it's slowly improving and hopefully I'll be better sooner rather than later."

Farina's side looked rudderless when Del Piero left the field in the 32nd minute of Saturday's disastrous 4-0 hammering at the hands of Brisbane.

But Emerton is confident the Sky Blues have the depth to cover his own absence as well as Del Piero's if they are ruled out on Saturday morning and admits last week's embarrassment is extra motivation ahead of the blockbuster Sydney derby.

"You don't really need any motivation to get yourself up for a game like this," he said.

"These are the games you look forward to as players but I guess coming off the back of a 4-0 defeat just gives you that little bit of extra motivation you need to hopefully go out there and get the job done.

"We owe it to ourselves and to our fans to put in a good performance.

"We need to bounce back and this weekend's obviously the perfect opportunity for us to do that and the boys have been working hard in training and it's a sell-out crowd so really looking forward to it.

"It doesn't matter who takes the pitch, there's all the motivation in the world to go out there and do well so the 11 players who take the park I'm sure will have the ability to get the job done."