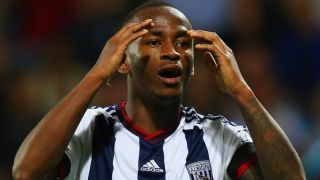 West Brom boss Tony Pulis says forward Saido Berahino will only be sold if the club receive an appropriate offer during a transfer window he could do without.

Berahino was unhappy when a proposed move to Tottenham broke down at the start of the season and he has also since been linked with a January switch to the likes of Chelsea, Leicester City and Stoke City.

Pulis did not rule out the prospect of a deal, saying that every player at West Brom - including Berahino - has a price.

"Every player is for sale if the price is right and if the club deem it to be right," said Pulis on Friday.

"It is the chairman's football club and financially he has always controlled it in a way that he has thought is the best way for West Bromwich Albion.

"Like I said, last year was a big disappointment for Saido, the club didn't want to sell him. He would have chosen to go, definitely, so that was a big knock for the boy and it did take its toll."

Pulis is hopeful this window will prove to be less controversial and praised the attitude of Berahino, who has yet to fully hit his stride since the Spurs move broke down.

"He came on at Chelsea and I was really pleased with his attitude," added the manager.

"He is getting fitter, but I wouldn't say he is back to his best just yet. The problem is we have this window every six months and speculation just hangs around.