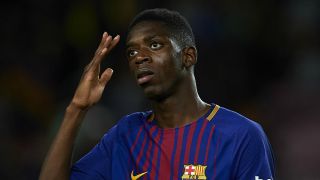 Dembele, 21, came off early in the second half at Camp Nou after picking up an injury following a tackle from Raul Navas.

The LaLiga champions confirmed the France international had sprained his right ankle and would be supervised by the club's medical staff for the next few days.

The injury is a slight worry for France less than a month out from the World Cup in Russia.

Dembele is part of Didier Deschamps' squad, who begin their tournament with a clash against Australia on June 16.