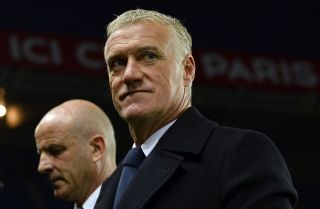 The 1998 world champions harbour slim hopes of qualifying automatically for Brazil 2014 going into their final game in Group I, although the odds are heavily stacked against Deschamps' men.

France need to beat Finland, hope Georgia beat a Spain side unbeaten in World Cup qualifying since March 1993 and require a four-goal swing to steal top spot and avoid the play-offs.

Deschamps' team prepared for the visit of Finland with a 6-0 win over Australia in a friendly on Friday, and the 44-year-old is full of praise for the current crop of players available to him.

"What I can tell you is that on this particular game (against Australia) I had the best players at my disposal," said Deschamps.

"In the past, I was forced to use different ones because I did not have the choice. But I have got a good base to work on with experience and individual quality.

"We are definitely able to do great things even though we were not able to sustain this level of quality all along our qualification campaign.

"It was a bit more difficult on our friendlies.

"One important factor is that the players are also very fit at the moment. And that showed on the team. It will be important to be at that level in a month."

Arsenal striker Olivier Giroud scored a brace against Australia to make it eight goals for club and country since the start of the season in August.

Deschamps added: "He already has a lot of credit since he played against Belarus (last month) and he started the game on Friday.

"There is another game on Tuesday.