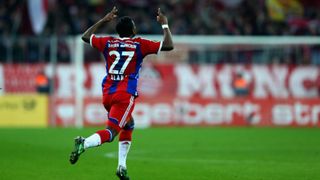 Alaba finally broke the second-tier side's resistance with a free-kick in first-half injury time in what was the first goal Braunschweig had conceded in this season's cup. Gotze doubled the advantage following a neat dribble shortly after the restart.

The result sent the record 17-time DFB-Pokal champions into the last eight and ensured Bayern have won 15 straight matches in the tournament since losing to Borussia Dortmund in the 2012 final.

Bayern began the game monopolising possession and showcasing some eye-catching one-touch passing as Franck Ribery, Arjen Robben and Alaba all went close in the early stages.

From their first break, however, Braunschweig thought they should have won a penalty, but Hendrick Zuck, whose swift footwork got him into the Bayern box, had his vociferous appeals waved away by referee Jochen Drees.

Largely thanks to the defending of Saulo Decarli and Marcel Correia, Bayern were limited to hopeful attempts on goal until just before the hour. That was when Robben drew three opponents towards him, faked the shot, and picked out Ribery in space inside the area, only for the Frenchman to shoot straight at goalkeeper Rafal Gikiewicz.

Bayern nevertheless made the breakthrough in first-half stoppage time when Alaba curled a free-kick from just outside the box in off the underside of the crossbar.

If Bayern were made to wait to break the deadlock, they quickly doubled their lead after the restart. Gotze received a Robben pass inside the Braunschweig area, jinked inside two defenders and, with the aid of a deflection, fired the ball past Gikiewicz.

Robben then cut inside only to shoot straight at Gikiewicz, who swiftly pushed Alaba's strike round the post.

Bastian Schweinsteiger headed a corner straight at the Braunschweig goalkeeper, before the man who replaced him, Juan Bernat, sliced a shot narrowly wide, allowing the visitors to hold on for a respectable loss.

Bayern will now join the likes of Bayer Leverkusen, Dortmund and Wolfsburg in Sunday's quarter-final draw.