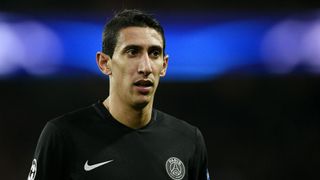 Laurent Blanc will make a late decision on Angel Di Maria's availability for Paris Saint-Germain's trip to Toulouse, but captain Thiago Silva is definitely out with a knee injury.

Di Maria drew praise from head coach Blanc for his role in Wednesday's 2-1 win over Lyon in the Coupe de la Ligue after coming off the bench.

However, the Argentina international hurt his foot in that fixture and is now an injury doubt when the Ligue 1 champions travel to Stadium Municipal on Saturday.

"Di Maria received a big blow on his right foot and was unable to train [on Thursday]," Blanc said.

"We have to see how recovers."

While it remains to be seen if Di Maria is passed fit, Blanc confirmed that centre-back Silva - who missed the Lyon clash - is sidelined.

"Thiago Silva is out," he added. "He has not recovered from his knee injury."

There was better news on Silva's defensive partner and fellow Brazil international David Luiz, though, who had been struggling with a back complaint.

"It is a little sore, but not too serious for David Luiz with his back," Blanc continued.