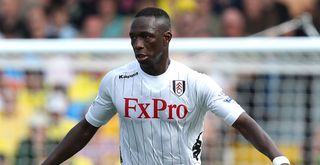 Diarra, 32, joined Fulham as in February 2012 after being unattached, but sufferred a knee injury in December and was then released by the club at the end of last season.

However, the former Lyon and Real Madrid man is looking to earn a new deal at Craven Cottage as he continues his recovery.

Still, Jol - who has made seven signings during the transfer window -  insists it will be some time before the Mali international is considered for a return to the first-team set-up.

"He is doing a lot of ball work and the warm-ups with us," Jol told The Fulham Chronicle.

"He needs another three or four weeks before playing games with us or the reserves and then we will make a decision on him."

Diarra made 19 appearances during his first spell with Fulham, scoring one goal.