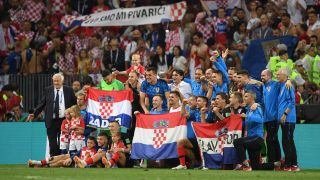 Zlatko Dalic's men came from behind for the third straight game in Russia, recording a 2-1 victory after extra time as the country moved into their first final.

Didulica, who made four appearances for Croatia and was part of the 2006 World Cup squad, lauded Dalic's side.

"From a Croatian perspective, unbelievable," the former goalkeeper told Omnisport.

"Not only the football, just to see these human beings going at it, playing like warriors, three games in extra time and to come out on top, it's something I've never seen before in my lifetime."

Croatia were incredibly pushed to extra time for the third straight outing, but they avoided penalties thanks to Mandzukic's fine finish.

"In terms of the game, it was cagey, but once again I think our fight came out on top," said the ex-Ajax keeper.

"I think we wanted it more in the end and I think it came down to the will.

"I think we're better footballers to be honest, we're classier, all over the ground, from the midfield to up front, but I think it came down to the guts and determination."

Croatia face France in the World Cup final in Moscow on Sunday.