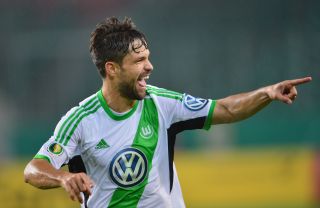 Diego spent a year on loan at Atletico in 2011-12, making over 40 appearances and winning the UEFA Europa League with the Spanish club.

His father Djair Cunha, who also acts as Diego's representative, confirmed talks to take the former Juventus man back to the Vicente Calderon Stadium are set to take place.

"The club that has been talking to me lately is Atletico Madrid," he told Lancenet.

"On Wednesday the president will possibly be in Germany for talks with Wolfsburg executives.

"He can sign a pre-contract agreement in January. Atletico Madrid would pay some compensation to bring the deal forward and that’s something that will have to be discussed."

Cunha indicated that Atletico are not the only club interested in Diego's services, with Flamengo and Botafogo both said to be looking to lure the 28-year-old back to his homeland.

However, the former Brazil international intends to remain in Europe for the time being.

"I've attended to all the interested Brazilian clubs but there has been no agreement on the financial side," Cunha added.

"There is a large market for Diego in Europe, where they are able to meet our financial pretensions.

"We’ve also received an offer from the United Arab Emirates, although this is not the right time.

"The idea is to stay in Europe for another four years."