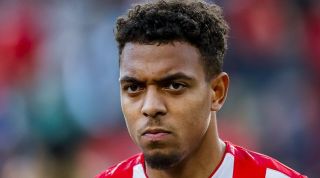 Arsenal are interested in re-signing Donyell Malen, the Dutch forward who they sold to PSV in 2017.

Malen spent the bulk of his youth career with Ajax, before moving to the Emirates Stadium as a 16-year-old in 2015.

He scored 14 times in 30 appearances in his first season with Arsenal’s Under-18s, impressing coaches with his link-up play and eye for goal.

In 2016/17 Malen was used out wider more than as a centre-forward, but he again excelled and was called up to the senior squad for the pre-season tour of Australia and China ahead of the following campaign.

However, Arsenal opted to sell the attacker to PSV in August 2017, a deal which surprised many of the club’s supporters due to his excellent form in the youth ranks.

After a year with the Dutch outfit’s youth side, Malen became a regular in the first team last season, scoring 11 goals in 42 outings in all competitions.

He has also won his first two Netherlands caps this year, scoring in the 4-2 victory over Germany in a Euro 2020 qualifier earlier this month.

And Arsenal are now considering launching a move to re-sign their former forward, which could cost them up to £50m.

That represents a huge increase on the £500,000 that PSV paid to bring him to the Eredivisie two years ago.

The Gunners are not the only club monitoring Malen, though, with up to 45 sides rumoured to be keeping tabs on the youngster.

Liverpool are among the interested parties, but PSV will hope to hold onto the attacker until next summer at the earliest.