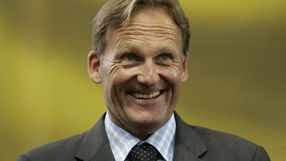 Dortmund have won 10 and drawn two since the winter break for a near-perfect second half of the season, extending their unbeaten run to 23 matches and climbing to 66 points.

Bayern, winners of nine in a row in all competitions, are only three points behind and their president, Uli Hoeness, has said the game will be the culmination of their "war of attrition" which will finally pay off.

Interest in the game is staggering. Dortmund had 450,000 ticket requests for the 80,000 seats in their stadium for the game that will be broadcast to 200 countries.

"You don't win a game with psycho strategies. I just don't think it is possible so it bounces off us," Watzke said.

"Our players are cracking up laughing with this Bayern talk. Ours is a new generation of players who just love to play football and want to win the next match."

So do the Bavarians, who know a victory would catapult the club, chasing an unprecedented German treble of domestic titles and the Champions League, back into top spot on goal difference.

"We are under bigger pressure because we are three points behind," said Bayern CEO Karl-Heinz Rummenigge. "We can kiss the title goodbye if we lose. We have respect but we are not afraid of Dortmund."

The two teams will also meet in the German Cup final in May.

Dortmund could have playmaker Mario Gotze back in the squad for the first time since the 19-year-old Germany international's groin injury in late January.

Bayern, on the other hand, look set to start again with Bastian Schweinsteiger in his usual holding midfield position.

The Germany international was in the line-up for their 2-1 win over Augsburg on Saturday following his weeks-long absence due to a knee injury.

"Obviously it will be a tough game but with our fans backing us and the floodlights on for the evening game, that is pure motivation for us," said Dortmund's Ilkay Guendogan, who scored in their 3-1 win over VfL Wolfsburg.

"We are just happy to be playing such a game," said the Germany international.

Third-placed Schalke 04, who tightened their grip on the last automatic Champions League qualification spot with a 3-0 win over Hannover 96 on Sunday, are six points behind Bayern on 57 and travel to Nuremberg, also on Wednesday.