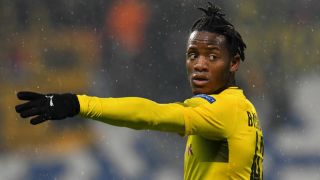 Borussia Dortmund are concerned they will miss out to another club on the permanent signing of Michy Batshuayi, sporting director Michael Zorc has said.

The striker has scored five goals in five games in all competitions since moving to Signal Iduna Park on loan from Chelsea in the January transfer window.

Batshuayi's form has led to speculation Dortmund will try to sign him on a long-term contract at the end of the season to make him the permanent replacement for Pierre-Emerick Aubameyang, who joined Arsenal last month.

But Zorc says there is no suggestion a transfer will become possible and is becoming worried Dortmund could be outbid by other interested parties.

"The situation hasn't changed since his signing, and certainly not to our advantage," Zorc told Kicker.

"He has become even more interesting to others."

"We tried our best to get a permanent option for Michy Batshuayi, but it was a no go for Chelsea," he said. "When Roman Abramovich says 'no', it's a 'no'."

Dortmund host Augsburg in their next league meeting on Monday.