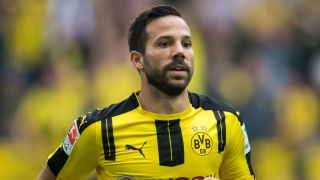 Borussia Dortmund's Gonzalo Castro says he would welcome a long-awaited Germany recall after impressing early in 2016-17.

Castro, 29, has not featured for the national team since November 2007, winning just five caps during more than a decade in the Bayer Leverkusen first team.

He joined Dortmund last year and has shone under Thomas Tuchel so far this season, helping his young team-mates to record eye-catching successive 6-0 wins over Legia Warsaw and Darmstadt.

Following his fine form, the midfielder stressed he would like to hear from Germany head coach Joachim Low ahead of the World Cup qualifiers at home to Czech Republic and Northern Ireland next month.

"Sure, it would be nice to be invited again. But if it is not enough, then it's not enough."

Quizzed on the reason for his displays in recent weeks, he added: "It's been going well for me for some time, but at the moment [my game] just fits perfectly with the team.

"The coach demands that we apply full throttle until the end [and] even after going 3-0 ahead, not to drop off. This benefits my game."

"Gonzalo is a very good and intelligent footballer," he said. "He was formerly selected and deserves to be called up again."

Next up for Dortmund is a Bundesliga match away to Wolfsburg on Tuesday.

"A tough game, but we are in good shape and want to win," Castro said.