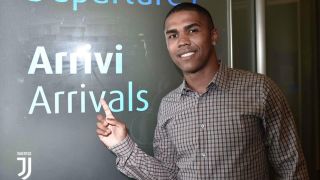 Douglas Costa has arrived for his Juventus medical as a move from Bayern Munich nears completion.

The winger landed in Turin on Tuesday and began his physical checks on Wednesday, with confirmation of his signing expected soon after if no issues arise.

Juventus have reportedly struck a two-year loan deal to bring the 26-year-old to Serie A, with an option to buy.

The switch comes after Bayern signed James Rodriguez from Real Madrid on a similar two-year loan with a purchase option on Tuesday.

Brazil international Costa had been expected to leave the Allianz Arena in this window, having made just 14 Bundesliga starts under Carlo Ancelotti last term.

The former Shakhtar Donetsk star is to become the latest player to transfer between the German and Italian champions, a list that includes Arturo Vidal, Kingsley Coman and Medhi Benatia, who made a loan deal from Munich permanent in this window.

And the Morocco international looks like playing a key role in helping Costa settle into Serie A, having offered him a warm welcome on Twitter after his arrival.

Costa has been at Bayern for two years after signing from Shakhtar in a €30million move.