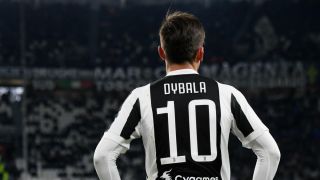 Paulo Dybala may not return from a thigh injury in time to take on Tottenham in the Champions League last 16, Juventus coach Massimiliano Allegri has warned.

Dybala has not played since a 1-0 win over Cagliari on January 6, although Juve have won each of their three games since then without conceding.

Indeed, the Bianconeri's run of consecutive victories stretches back nine games, a sequence that has maintained their position a point behind Napoli at the top of Serie A.

Federico Bernardeschi and Douglas Costa both picked up injuries at Atalanta in midweek, but he will not rush Dybala back.

"Dybala is recovering well but in terms of being ready for the Champions League we'll still have to evaluate," he told reporters.

"It's not going to be just a one-off match against Tottenham."

Bernardeschi is not fully fit following his knock, but Allegri admits the winger may have to play through the pain barrier with Juve's options depleted.

"Naturally if Dybala, [Juan] Cuadrado and Douglas Costa are out Bernardeschi is the only one left, so he has to grit his teeth and play regardless," he added.

"Unless he feels enormous levels of pain, he will play.

"If Bernardeschi doesn't make it, we could play with someone a little deeper, or simply use different characteristics in the position of right winger.

"Otherwise it'd be shaking things up that don't need shaking up right now."

Before thoughts turn to Tottenham, Allegri has Sunday's Serie A clash with Sassuolo to prepare for.

The Juve coach expects a tough test, despite Sassuolo languishing in 14th, without a win in four.

"It will be important to approach the game in the right way, we played a great match in Bergamo and there must be no dips in focus. We can't afford to lose any points.

"Sassuolo have players with good technical ability going forward, and with the signing of [Khouma] Babacar they've added physicality. They drew with Roma and beat Inter so this is a match that we have to start on the front foot."