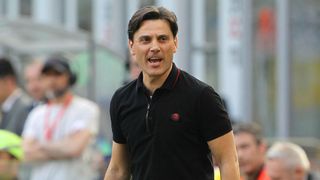 Vincenzo Montella prefers the challenge of facing Serie A's top teams after AC Milan took just one point from two matches against relegation strugglers in the past fortnight.

A 2-1 home defeat to Empoli was followed by a 1-1 draw at Crotone, who occupy a spot in the bottom three, ahead of second-placed Roma visiting San Siro on Sunday.

Milan travel to Atalanta next weekend in what could prove a pivotal meeting to decide the European spots, and Montella believes his players need less instruction for fixtures against sides at the right end of the table.

"Roma and Atalanta are actually easier games to prepare for players, because they bring more motivation," he told Milan TV.

"We need to get more points than we did in the reverse fixtures. Roma represent one of the most important steps towards European qualification, although the head to head with Atalanta next week might be even tougher.

"Even if we are coming off two terrible results, I am sure the fans will be close to us with the same affection they've shown throughout the campaign. We need everyone.

to : "We come off two negative results, but I'm sure the fans will be backing us. They've done it throughout the season"May 6, 2017

"We care a great deal about getting into Europe, but in my experience the first few rounds of the Europa League are below the level of Serie A difficulty, whereas in the second half of the tournament it's closer to the Champions League."

Montella spent 10 years at Roma as a player, a period of his career upon which he reflects warmly.

"I am very fond of Rome, as my children were born there. It's a place that wins you over. It's a pleasure to face them tomorrow, as my past is there," he added.

"Both sides need to win in order to achieve the objectives that, in my view, we deserve."