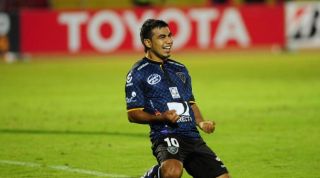 Sornoza scored a brace in his side's 2-1 win at Universidad Catolica as Pablo Repetto's men moved five points clear at the top.

Second-placed Barcelona were held to a 2-2 draw by Deportivo Cuenca, paving the way for Repetto's side to increase their lead.

And they took full advantage at the Estadio Olimpico Atahualpa, with Sornoza curling in a 59th-minute opener into the bottom corner from just outside the area.

Armando Wila's 80th-minute penalty gave the ninth-placed hosts hope, but they were unable to find an equaliser.

Universidad Catolica coach Jorge Celico was sent off in the first half after an altercation with an opposition player.

Barcelona conceded late on in a 2-2 draw against Cuenca.

Juan Manuel Cobelli put visiting Cuenca ahead in the 20th minute with a neat finish from an angle.

Ismael Blanco headed in a close-range leveller moments later and his team were ahead before half-time.

Goalkeeper Maximo Banguera stepped up to convert from the penalty spot.

But Banguera was unable to stop his side conceding an 85th-minute equaliser as Cobelli's smart finish with the outside of his left foot found the bottom corner.

Deportivo Quito and Manta played out a 1-1 draw and Emelec enjoyed a 1-0 victory at Mushuc Runa.