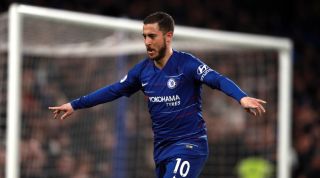 Mauricio Pochettino’s side marked the opening of their new state-of-the-art ground with a 2-0 win over Crystal Palace on Wednesday night, while Chelsea ran out 3-0 winners at home to Brighton.

Hazard, who was on the scoresheet for his side, was asked about the threat of Spurs after the game and responded by reminding journalists of the Blues’ bulging collection of silverware.

“I think Tottenham, for two or three years, have been one of the best teams in England,” the Belgian said.

“That is for sure. I don’t like that, to be fair – we are Chelsea, and it is a big derby against them – but we have to accept it.

“For the Premier League it is good: a new stadium, they have top players. But, in the end, you know at Chelsea we have won a lot of trophies, and they have not. So I hope this continues.”

Only one point separates Spurs in third from Chelsea in fifth with six rounds of the Premier League season remaining, and Hazard insisted that his team could benefit from being under the radar in th Champions League race.

“People are not talking about Chelsea for the top four and I like that,” he said.

“We are quiet, in fifth or sixth, and then we can just be ready for the next game. We want to go game after game. We have hard matches coming up against Liverpool and Manchester United, but Chelsea is a top club.

“We like this challenge so we will go to these teams and try to win because, at the end, we want top four.”

Hazard famously scored the goal against Spurs that handed Leicester the league title in 2015/16, after claiming in a prior interview that he didn't want them to win the league.

ANALYSIS Why is nobody talking about Eden Hazard for the PFA Player of the Year award?

STORIES Close encounters with Ray Wilkins: how the Chelsea great schooled me in a radio studio