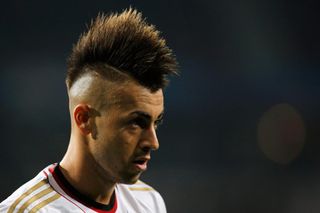 The Italy international has featured in just three Milan games since September after being dogged by a problematic foot injury.

However, with Milan still in with an outside chance of securing a European spot, the 21-year-old says he is fit enough for a cameo in Sunday's Derby della Madonnina.

He also revealed his frustration at seeing the injury come back during December's UEFA Champions League draw with Ajax.

Asked by La Gazzetta dello Sport on his prospects for the weekend's game, he said: "I hope to play in that match. I don't have 90 minutes in my legs, but 20 or 30 in the second half would be possible.

"I want to help out in getting to the Europa League. It's been tough being stuck at home. The worst day was during Milan-Ajax when the injury came back. After taking a shot I could feel that it had gone and then it was time for therapy.

"Two months of inaction, then the conservative therapy didn't work, so I lost another four months that I wouldn't have lost if I'd had the operation.

"People have said a lot of things about me and some of them have hurt. Maybe that's the other side of popularity, you can’t please everyone."

Despite his lack of match action this season, El Shaarawy was invited to an Italy training camp by coach Cesare Prandelli earlier this year.

The former Genoa man harbours hopes of gaining a place in Prandelli's FIFA World Cup squad but knows he must start to perform regularly for his club to do so.

"I know it won't be easy to get a place on the plane for Brazil and I don't have much time but I do have a clear objective in my head," he added.

"Do well with Milan and get back playing for Italy. I want to show everyone, including Prandelli, that I'm in good shape. I'll be doing everything possible."