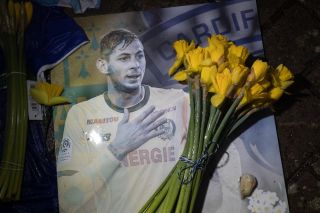 Emiliano Sala’s family will mark the anniversary of the striker’s death in “private, quiet contemplation of their loss”, their British lawyer has said.

The Argentine forward died on January 21, 2019 when the plane carrying him from Nantes in France to his new club Cardiff crashed in the English Channel near Guernsey.

Cardiff – who were in the Premier League at the time – and Nantes have since been in dispute over fee payments.

Cardiff are not holding an official vigil to mark the anniversary of Sala’s death, but have said fans are welcome to lay tributes at the Fred Keenor statue outside Cardiff City Stadium throughout the day.

Nantes – for whom Sala scored 42 goals in 120 league games during three-and-a-half years at the club – will wear a special commemorative Argentine-inspired shirt at the Ligue 1 home game against Bordeaux on Sunday.