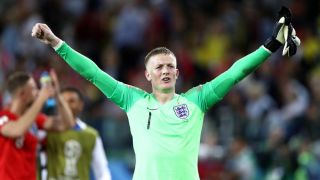 Nothing is ever straightforward with England. But somehow, it might yet be "coming home".

Gareth Southgate's men had all but beaten Colombia, only to throw it away and then conjure up a second victory on a long, draining night in Moscow.

If that wasn't remarkable enough, the fact they did on a penalty shoot-out is bordering on the downright bizarre.

In truth, it was no more than England deserved.

Leading through Harry Kane's 57th-minute penalty, it seemed as though England had done enough, especially when Jordan Pickford produced a stunning save deep in injury time to keep out Mateus Uribe's 30-yard drive.

But no. From the resulting corner, Yerry Mina rose highest to power a head down into the turf and up and over Kieran Trippier on the line.

England stunned, their fans silenced. The majority inside Spartak Stadium, those clad in yellow, went berserk.

Extra-time came and went and so, to spot-kicks.

But Uribe's well-struck shot cannoned back off the bar and then Pickford stuck out his left arm to deny Carlos Bacca. It left Eric Dier with a shot at glory that he duly took.

Colombia will look back with inevitable regret, but they can also look at the mistakes that contributed to their downfall.

Colombia cried foul but they walked a fine line all night. Indeed, a more experienced official than Geiger would surely have clamped down much earlier.

How the South Americans finished with 11 players on the field will also remain a mystery. The constant, and often aggressive, in-your-face remonstrating with the referee was appalling while Wilmar Barrios somehow only saw yellow for a blatant and potentially dangerous thrust of the head into the chest and chin of Henderson.

That's not to say England were blameless either. Henderson also pushed his head into an opponent while a second-half Harry Maguire dive in the area was nothing short of embarrassing.

The bigger picture is England roll on. This was undoubtedly the toughest test on paper in a half of the draw that now only contains Sweden, England's next opponents, Croatia and Russia.

Southgate will do his utmost to dampen the growing expectation, but there is no reason why England cannot be back in Moscow for the final a week on Sunday.

If England can win a penalty shoot-out then the possibilities are endless.