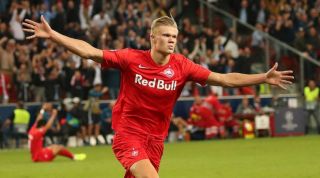 Mino Raiola has refused to rule out a future Premier League move for Erling Haaland.

The Red Bull Salzburg striker has agreed a deal to join Borussia Dortmund in January, having also been strongly linked with Manchester United and RB Leipzig.

And Raiola, Haaland's agent, says that he "hopes" Haaland will one day play in England's top flight, despite insisting that Dortmund is the best place for his client to be right now.

"Everyone is speaking about Manchester United but there were 12 clubs interested in him," the Italian told Sky Sports.

"I don't understand why in England there is such a buzz about why he has chosen Borussia Dortmund. He is a young player and he has all the time to come to the Premier League in his career and we hope there will be a time.

"He didn't feel it was the time at this point to move to the Premier League. Borussia Dortmund is a fantastic club and I think the best move for his development at this point.

"I have never entered into details of negotiations so I will not do that now. I also feel I don't have to defend myself [about] this kind of politics, he added on United's failure to land the striker.

"The only [person] that needs to know everything is the player and the only one that has the right to explanations is the player.

"I think that people say that these things Manchester United wanted to bring out, I don't believe in it. It is very strange in my opinion.

"I think there was a good contract between the Norwegian side - Ole Gunnar Solskjaer and Haaland know each other very well."