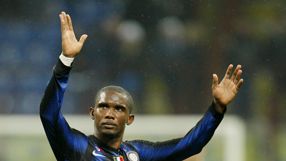 "I wish to offer my sincere apologies to all the people who could have been shocked and surprised by my unfortunate gesture last Sunday in Verona," Eto'o said through a statement released by his agent on Wednesday.

Eto'o struck Chievo defender Cesar in his team's 2-1 defeat in an incident that drew comparisons to the infamous headbutt by France's Zinedine Zidane on Italy defender Marco Materazzi in the 2006 World Cup final.

"My apologies go to all the protagonists of the game, to the referees who could not have seen this foul because it was out of their visual range, but also to all the Inter fans and to all those who love football," Eto'o added.

"My apologies also go to my coach and team mates, whom I leave for three Serie A games. Finally, I ask forgiveness from president (Massimo) Moratti, who has always trusted me."