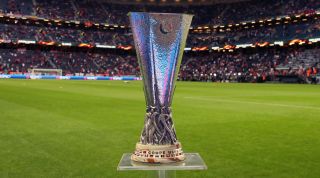 Manchester United, Wolves and Rangers have discovered their potential rotes to the Europa League final in Germany next month.

The competition will resume after a five-month hiatus over the space of 16 days with behind-closed-doors, straight knockout matches at neutral venues.

However, some second-leg round of 16 ties will need to be played at clubs' home grounds before the quarter-finals can commence. That means Manchester United and Wolves will have one more game at Old Trafford and Molineux respectively, while Rangers face an away trip to Bayer Leverkusen.

All of the remaining 15 games will be shown on BT Sport in the UK.

Two round of 16 ties between German and Italian sides – Getafe vs Inter Milan and Roma vs Sevilla – were unable to stage first leg games due to early coronavirus outbreaks, and so will take place as single-leg knockout matches at neutral German venues.

1. Shakhtar Donetsk or Wolfsburg vs Basel or Frankfurt

2. Manchester United or LASK vs Copenhagen or İstanbul Başakşehir

3. Inter Milan or Getafe vs Bayer Leverkusen or Rangers

4. Wolves or Olympiacos vs Roma or Sevilla