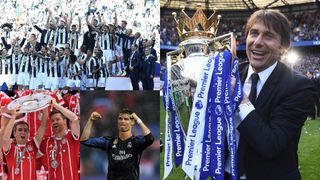 With the Bundesliga, Ligue 1, Premier League and LaLiga all coming to an end this weekend, we are slowly approaching the end of what has been an intriguing 2016-17 campaign.

Although there is still one game to go in Serie A and there are a number of domestic cup finals on the cards in the weeks to come - with the Europa League and Champions League finals on the horizon as well - most teams are already done for the season and have started preparations for 2017-18.

Below, we take a look at which teams have reason to celebrate and which sides end the season in tears.

*Manchester United will qualify for the Champions League instead if they beat Ajax in the Europa League final.