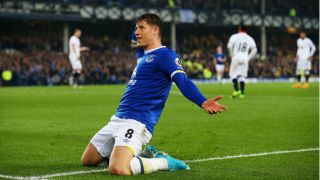 Everton contract rebel Ross Barkley underlined his importance to Ronald Koeman's side with a splendid strike to ensure the Toffees ended their 2016-17 home campaign on a high with a comfortable 1-0 Premier League win over Watford.

Koeman issued Barkley, whose deal expires at the end of next term and is yet to agree an extension, with an ultimatum in his pre-match press conference, demanding the England international make a decision on his future at the club by the end of the season.

Despite the uncertainty, Barkley started on Friday, rewarding his manager's faith with a superb solo effort 56 minutes into a rain-swept contest at Goodison Park.

Barkley should have perhaps been on the scoresheet earlier in proceedings, having failed to beat Heurelho Gomes from close range six minutes in.

Everton were denied a penalty as they looked to build on their lead, though it mattered little as Koeman's side cruised to their ninth win from 10 league games at home in 2017.

With Everton unable to move out of seventh place, the victory merely adds some final gloss on what has been an impressive debut season at the helm for Koeman, while defeat effectively ends Watford's hopes of a top-half finish.

Barkley looked sharp from the off, and crafted the game's first chance when he forced Gomes into action with a close-range effort.

Watford's goalkeeper was at his best to keep out Phil Jagielka's volley soon after, before Stefano Okaka fired wide at the other end following a fine solo run.

Tom Davies, having capitalised on a terrific flick-on by Barkley, was the next Everton man to test Gomes, who did well to parry the midfielder's venomous strike wide.

Walter Mazzarri, who thanked the travelling Watford fans for their support by paying for their first drinks of the evening, was forced into a change shortly before half-time - Juan Zuniga replacing the injured Christian Kabasele.

Koeman switched systems at the interval with the introduction of Enner Valencia in place of Mason Holgate, the Ecuador forward combining well with makeshift full-back Davies down the right.

However, it was Watford who should have taken the lead eight minutes after the restart - Troy Deeney unable to apply the finish after latching onto Daryl Janmaat's cross.

And Barkley immediately made the visitors pay, leaving Gomes flat-footed with a brilliant long-range effort having been allowed far too much space by Watford's defence.

Everton should have been awarded a penalty just after the hour mark when Janmaat fouled Romelu Lukaku, but referee Kevin Friend failed to spot the Dutchman's misdemeanour.

With Watford offering little threat going the other way, Everton pressed on - Morgan Schneiderlin going close with a header from Leighton Baines' corner.

Barkley was taken off to a standing ovation late on and, although Okaka brought an instinctive stop out of Joel Robles, Koeman's side had no need for a second as the midfielder's stunner proved enough to secure their best-ever Premier League points haul at home.