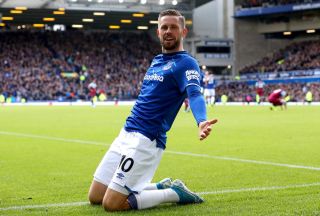 Brazilian Bernard netted after 17 minutes at Goodison Park and substitute Sigurdsson struck from distance in stoppage time as the Toffees ended a run of four successive Premier League defeats.

It was a victory Silva’s side, who had begun the game in the relegation zone, thoroughly deserved.

The hosts also hit the woodwork twice and Hammers goalkeeper Roberto made a number of good saves. Were it not for a lack of a cutting edge and some dogged West Ham defending, they could have won by a more convincing margin.

They looked hungry from the outset, although their enthusiasm almost got the better of them early on as Richarlison chopped Felipe Anderson down but Manuel Lanzini put the resulting free-kick wide.

Everton reacted to that well and forced enough openings to create several chances.

Theo Walcott and Tom Davies, both brought back into the side among five changes by under-pressure Silva, had chances early on. Walcott saw an effort from distance deflected wide and Davies spurned a glorious opportunity at the back post when Roberto saved at point-blank range.

Bernard, another player recalled, made the breakthrough after latching onto a fine ball from Walcott. The Brazilian declined to shoot first time as Arthur Masuaku closed him down but he cleverly cut back and wrong-footed the defender before sliding the ball under Roberto.

Richarlison went close to a second from an Alex Iwobi pass but his low shot came back off a post and Iwobi then shot at Roberto from distance.

Mark Noble created a chance for the visitors with a lofted ball over the defence but Pablo Fornals got no power on his header.

Richarlison put the ball in the net again for Everton early in the second but his volley was ruled out for offside.

West Ham threatened again as Fornals shot wide but Lucas Digne was only narrowly off-target from a long-range free-kick for the hosts and Yerry Mina twice headed at Roberto from corners.

Realising his side was lacking a presence in midfield, Hammers boss Manuel Pellegrini sent on Jack Wilshere but the change had little impact.

The Toffees went close again as Walcott rattled the crossbar with a ferocious half-volley and Iwobi wasted another chance as he was put clean through on goal but shot at Roberto. Everton also had another goal chalked off when a Mina header was disallowed.

The Merseysiders were almost made to pay for the missed chances as the ball fell to Angelo Ogbonna from a corner but Jordan Pickford saved brilliantly.

Sigurdsson came off the bench to ensure Everton had the final say, striking brilliantly from the edge of the box.