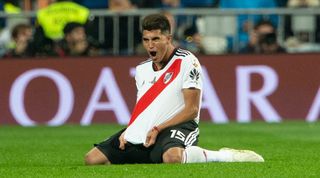 Palacios could cost the Gunners £15-20 million, according to Fox Sports Argentina.

Real Madrid were previously leading the chase for Palacios to the extent that they had reportedly agreed a £20 million deal.

However, following an injury, Madrid cooled their interest.

Arsenal kept tabs on Palacios and are now readying a bid for the 20-year-old.

He is seen as player with high potential according to the report, and is attainable with or without Champions League football.

Palacios's agent told Radio Continental that his client would be 'leaving in June' and that clubs from 'Germany and England are asking for him'.

One's Kompany: just where have all the player-managers gone?