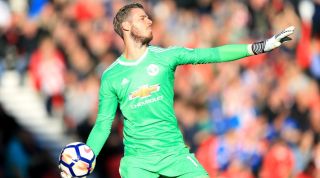 To curb time-wasting, players will have to leave the pitch at the nearest point to them

The desire to reduce obvious time-wasting is fully understandable. Players have grown accustomed to jogging over to the far side of the pitch in anticipation of their number being held up, then beginning a painfully slow walk while the referee chivvies them along.

But this seems like a risky, potentially inadvisable move. After Eric Cantona’s kung-fu kick in 1995, the rules were changed so that players who had been sent off would walk to the tunnel rather than immediately off the pitch and around its perimeter. That was in response to the vitriolic abuse Cantona had received from Crystal Palace supporters as he walked past two sides of the ground. Players across the board welcomed the rule change.

This new introduction would seem to risk a repeat of that abuse. Witness the behaviour of the Portsmouth supporter who kicked Sunderland’s Luke O’Nien last week. Football tribalism is on the rise, and forcing players to walk in front of away fans potentially makes them fair game for similar treatment.

Would a better solution not be for the referee to stop the clock when a substitution begins and then restart it as the game commences? That would remove all need for time-wasting.

When there is a defensive wall of three or more defenders, the attackers are not allowed within one yard of the wall

Something that has been addressed because it was becoming more than a little messy. Most free-kicks within 30 yards of goal would be preceded by attacking players trying to squeeze in between defenders, thus causing pushing and shoving as they fought for the prime real estate in front of the goalkeeper.

In reality, many of these situations ended in fouls that were allowed to go by officials. Attacking players would lean into opponents to create space or impede them from jumping and blocking the shot. Referees could - and maybe should - have penalised these offences, but they were often so difficult to spot (six of one, half a dozen of the other) that it remained a viable tactic.

The new law will take some getting used to, and the exact measurement of one yard will presumably not be marked with vanishing spray. But it will be interesting to see if it results in fewer shots taken from free-kicks. If you have a three-man defensive wall with no attacking players around it, that leaves the potential for plenty of space for players in the penalty area if the set-piece is delivered into the area rather than at goal.

And, if that does prove to be the case, is this the beginning of the end for defensive walls? Better to mark those spare men and allow your goalkeeper a clear sight than leave them free and hope to block the shot?

People will rue a part of football culture lost to the ether, and extrapolate that to blame its passing on homogenised, sanitised modern football. But in truth the contested drop ball became a thing of the past a long time ago. Having two players wildly aiming kicks while stood 30 centimetres apart was hardly the perfect way of recommencing play for an official.

As of next season, the last team to touch the ball will be given it back by the opposition. That seems to suggest that play will start with them rather than, as now, be returned by the opposition (to the sound of polite applause from supporters who appreciate the opposition doing something they are literally obliged by the laws to do). But do players have to return to their original positions? Or can a team (we’re looking at you, Burnley) pile players into the penalty area and use the restart as the chance to launch the ball into the penalty area?

The other interesting development is that if play is stopped with the ball in the penalty area, it will restart with the goalkeeper no matter which team had possession. Look forward to that angering supporters from August onwards.

No touching of the goal frame, no movement, one part of boot touching goal-line when penalty is taken, no standing behind the line

Part of a wider crackdown on gamesmanship, and goalkeepers have been allowed to get away with some delicious nonsense at penalties for too long.

The ‘no movement’ provision is interesting because it stops goalkeepers attempting to double bluff penalty takers by moving one way before diving the other, and the ‘no standing behind the line’ potentially crucial because goalkeepers would often take a small jump forward onto the line to be in a better position to dive at a diagonal out of their goal and close down the angle.

But, as before, the whole thing depends upon it being properly regulated. Goalkeepers are already supposed to remain close to the line until penalties are struck, but anecdotal evidence suggests that many get away with moving far beyond it and only a very small percentage of penalties are actually retaken.

The ‘no movement’ provision in particular is very likely to slip. If a goalkeeper lifts his arm or leans one way as the taker is running up to the spot, is any referee really likely to penalise them?

One's Kompany: just where have all the player-managers gone?

Possibly the most interesting rule change of all. Until now, a goal-kick had to leave the area before being in play. That didn’t used to be an issue; goalkeepers almost always kicked the ball long into midfield where an aerial duel would take place near the halfway line.

But the rise in passing out of defence, and the subsequent rise of intense pressing high up the pitch to counteract it, has led to false breaks in play. When a goalkeeper passes out to a defender from a goal-kick and that defender has an opponent pressing them, they could deliberately intercept the ball in the penalty area and effectively buy a restart from the referee.

That is no longer the case. Goalkeepers will be able to pass to team-mates within the penalty area, thus allowing for a far speedier process of passing out of defence in order to combat the high press. You can easily imagine Ederson running with the ball into the six-yard box to play a quick pass to Aymeric Laporte and get the ball into midfield before the opposition has had chance to regroup. One of the slowest elements of modern football is about to get a recharge.

In truth, this isn’t a dramatic rule change. Deliberate handballs were already outlawed, but if the referee spotted the ball hitting a hand (rather than hand hitting ball) and thus giving the attacking side an advantage in the scoring of a goal, they would have usually blown for an offence.

But the reality is that referees couldn’t hope to spot every touch on the ball in a crowded area or whether a ball had hit hand or hip, so it’s the change of a rule in combination with the introduction of VAR that will allow it to be fully policed. We do now at least have greater clarity - if it hits your hand, it’s handball - as with hockey and the ball striking a foot.

It’s also important to note that this is only an introduction for attacking teams, not defenders in their own box. Those debates will continue for now.

Good lord. Imagine you score a crucial goal for your team, and it sends you into a bout of emotional disarray. You run at your supporters, who are going equally wild, and embrace them. You’ve done it. You’ve made the difference. You love those supporters. They love you.

And then you realise that the goal has been referred to VAR and, after a delay, is ruled out. And then the referee comes over and shows you a yellow card for celebrating a goal that didn’t even count. Gutted.

If two teams are tied on points, goal difference, goals for and goals against, then their place in the league will be determined by their head-to-head record

Previously, this situation would result in a play-off between the two sides: something that has so far happened a grand total of zero times. While this is in theory a sensible change, it is very likely to stay theory-based.

Rule 9 – Scoring from a goalkeeper's throw

If the ball goes into the opposition goal direct from a goalkeeper's throw, a goal-kick will be awarded

Again, this is solving a problem that has never actually happened in real life. Worse, if it ever did happen, it wouldn't actually be a problem. Just give the goal.

Quiz! Can you name the 71 players with at least 40 Premier League assists?