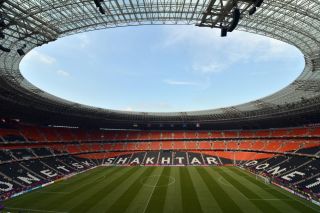 A brief statement from the Ukrainian champions confirmed damage to the stadium, with no members of staff hurt in the incident.

"As a result of shelling, there are numerous damages of the northwestern facade of the stadium, communications, equipment and detached building of the energy centre, which is located in the northern part of the Donbass Arena park.

"There are no casualties among the stadium staff."

The Donbass Arena was opened in 2009 and hosted three group-stage matches during Euro 2012, as well as one last-eight clash and the semi-final between Spain and Portugal.

Ukraine has been beset by recent political unrest, although it is unclear whether Saturday's events are linked to the troubles.

Shakhtar are next due to play at the arena on Friday, in a league clash with Illichivets.