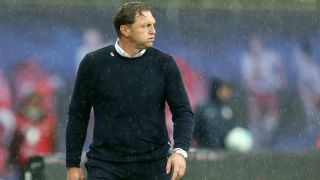 RB Leipzig head coach Ralph Hasenhuttl is "extraordinary" and has everything he needs to be capable of coaching Bayern Munich, according to the Bundesliga champions' former sporting director Matthias Sammer.

Hasenhuttl has emerged as one of Germany's most promising managers in recent years, initially impressing with Ingolstadt before taking over at Leipzig.

The former Austria international guided Ingolstadt into the Bundesliga for the first time with promotion in 2014-15, before keeping the club in the top flight by finishing 11th.

He opted not to renew and headed to promoted Leipzig in July 2016, presiding over a remarkable campaign which saw them finish second only to Bayern and secure Champions League football.

Even with the extra complication of European football this term, Leipzig have started the season brilliantly and sit just a point behind the top two – Borussia Dortmund and Bayern – in the Bundesliga, leading to Sammer signing his praises.

Sammer, who left Bayern after recovering from a brain illness in 2016, does not necessarily think Hasenhuttl should rush into joining the Bavarians, however, suggesting that next year - when Jupp Heynckes' contract ends - might come too soon.

"Ralph has everything," he told Eurosport. "He is collecting continental experience with Leipzig already, he and his team are in the top spots of Bundesliga, he integrated really well into the club and is making the next step.

"But give him time to improve and gather experience, so that we don't put pressure on this great personality for something that might come too early [coaching Bayern Munich].

"His basic talent is extraordinary, and that is what makes him a perfect for Bayern, some time.

"I think that for Ralph, Leipzig will still be a great fit for many years to come. They have a clear idea and philosophy that work together with his thoughts. Plus, the experience that he gathers every year and in every single European game.

"That's what makes him – and Leipzig might be angry about this – but that makes him a perfect fit to become Bayern coach or a coach of another great team. He's got the potential, but he will need some time."

Hasenhuttl has two opportunities to impress Bayern this week, as the two sides face off in the DFB-Pokal on Wednesday, before also clashing in the Bundesliga on Saturday.