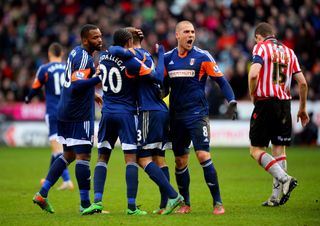 League One outfit United, who beat Aston Villa 2-1 in the fourth round, looked to be on course for a second successive Premier League giant-killing when striker Chris Porter gave them the lead midway through the first half at Bramall Lane.

However, the game turned early in the second period when United captain Michael Doyle was sent-off for violent conduct.

And Fulham, who needed a replay to overcome Norwich and reach the fourth round, took advantage of the extra man as Colombian striker Rodallega levelled matters with 15 minutes remaining.

Rene Meulensteen's side could not break through a determined home defence in the closing stages, with Darren Bent somehow shooting wide from point-blank range late on as United held on.

The hosts handed a debut to John Brayford, signed on loan from Cardiff on Friday, while 19-year-old Joshua Passley made his first appearance for a Fulham side that featured 11 changes from the 2-0 Premier League defeat to Arsenal.

Fulham made a bright start to proceedings and created the game's first chance after five minutes as Rodallega headed narrowly over the crossbar.

However, the visitors were forced into a change shortly after, Ange-Freddy Plumain replacing John Arne Riise following the Norwegian's collision with an advertising hoarding.

Jose Baxter curled wide from a free-kick for Clough's men just after the 20-minute mark, as chances proved few and far between in the early stages.

But United took the lead with their first real opportunity of the game after as Porter turned home Harry Maguire's shot across the face of goal.

Clough made one change at half-time, with another new recruit Stefan Scougall taking the place of goalscorer Porter.

And United were forced to make a further alteration just minutes into the second half as Robert Harris came on for injured defender Maguire shortly after Pajtim Kasami had curled wide for Fulham.

United were then reduced to 10, Doyle seeing red for an ill-advised kick on Chris David in an off-the-ball altercation.

Still, that dismissal did not impact the hosts' ambition, and midfielder Ryan Flynn - who scored the winner at Villa Park in round three - came close to adding a second when his near-post shot was kept out by David Stockdale.

Fulham dictated possession in the second half as their numerical advantage began to tell, but Meulensteen's men were fortunate not to concede a penalty for Aaron Hughes' apparent trip on Flynn.

Again Marriner dismissed the claims, and Fulham's quality told in the 75th minute, Rodallega finding the bottom corner from the edge of the area with a fierce low finish.

Defender Philippe Senderos hit the bar with a header eight minutes from time before Bent's incredulous miss encapsulated a frustrating afternoon for Fulham.