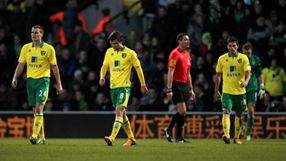 Staid and predictable and in danger of becoming little more than a sideshow, the FA Cup was given the equivalent of life-saving surgery as Liverpool, Tottenham Hotspur, Norwich City, Queens Park Rangers and Aston Villa were dumped out by lower league clubs.

Those who fell, however, made wholesale changes, choosing to rest top players and blood inexperienced youngsters with important midweek Premier League games uppermost in the minds of under-pressure managers.

QPR boss Harry Redknapp described the 4-2 defeat by third-tier Milton Keynes Dons as "disgusting" but he retained only two players from the side that drew with West Ham United the weekend before.

Perhaps making a point to the club's powerbrokers about the paucity of his squad, Redknapp clearly chose to prioritise their fight to avoid relegation.

Norwich's elimination was less excusable. The Canaries enjoy the relative comfort of a seven-point cushion over the bottom three but still made six changes against Luton Town before becoming the first top-flight side in 24 years to lose to a minor league club.

The reality of the modern English game is the Premier League and Champions League are financial behemoths and clubs are less interested in silverware than keeping their noses in the money trough.

If top-flight survival is threatened or there is even an outside chance of reaching the promised land of a top-four place and Champions League qualification, then the FA Cup takes a back seat.

Dalglish was later quoted as saying that not even an FA Cup victory would have kept him in his job.

It was perhaps with those words ringing in his ears that Liverpool manager Brendan Rodgers made five changes to his side at third-tier Oldham Athletic on Sunday including dropping captain Steven Gerrard to the bench.

Liverpool were roughed up 3-2 by Oldham in a defeat that hinted at the fact that cultured Premier League sides had forgotten how to deal with the old-fashioned high ball into the box, part of the staple diet of lower division clubs.

Rodgers then chose to point the finger at those he had drafted in.

"I was disappointed with the young players. We're trying to give them experience and let them see what it's like to play for Liverpool," he told reporters.

Liverpool are seventh in the league but it seems the outside chance they have of finishing in the top four made changes inevitable.

It is unlikely that 22-year-old centre-back Sebastian Coates or 19-year-old full-back Jack Robinson will be retained when Liverpool get back to league business against Arsenal on Wednesday.

The seven-times FA Cup winners were not alone in concentrating on their Champions League potential.