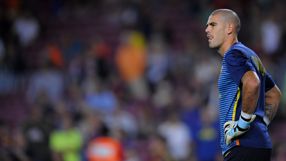 Spain's number two behind Real Madrid's Iker Casillas, Valdes, 31, has been at Barca since joining their academy in 1995 but has said he is keen to experience other leagues and cultures and will not stay beyond June 2014 when his contract expires.

"What we have to do is respect his decision and leave it at that because we have to fight for titles," Fabregas told a news conference on Tuesday.

"Football carries on, the club too and the most important thing is the trophies we can win at the end of the season," added the former Arsenal captain.

"We should be worried if he trains poorly and it's the exact opposite. He seems like a youth player at first-team training.

"He has given the club a lot of time to find a solution. He did not think of himself but of the club and the team and what he has decided is proper."

Valdes's announcement has prompted widespread media speculation about who might replace him.

Liverpool's Pepe Reina, who was with Valdes at Barca's youth academy, Manchester United's David de Gea and Atletico Madrid's Thibaut Courtois, on loan from Chelsea, have all been linked with the job.

Valencia's Vicente Guaita, considered the kind of talented ball player Barca would be looking for, is also reportedly in the frame.