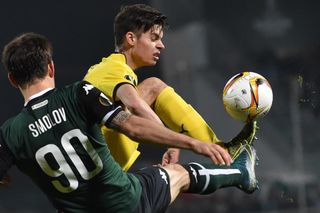 Pavel Mamaev's second-minute penalty sent FC Krasnodar through to the knockout stages of the Europa League, as they defeated already-qualified Borussia Dortmund 1-0 at Kuban Stadium.

Mamaev converted from 12 yards out following a foul by Mats Hummels on Mauricio Pereyra and Krasnodar managed to hang on for the remainder of the match despite incessant Dortmund pressure, meaning they will accompany their opponents from Group C into the last 32.

The result means Dortmund suffered a couple of unwanted firsts - they had never previously lost away to a Russian side, while head coach Thomas Tuchel tasted defeat for the first time in nine European fixtures in charge.

Dortmund were already certain to go through, yet the reverse was hardly the response they wanted after seeing their four-match winning run in the Bundesliga come to an end at the hands of Hamburg last Friday.

Krasnodar now sit level with Dortmund on 10 points, leaving the clubs in a final game shoot-out to decide who finishes top of the table.

Dortmund were left to curse a disastrous start that saw Hummels give away a penalty inside the first minute, the visiting captain pulling back Pereyra as he looked to get onto a pass over the top.

Mamaev punished Hummels for his error, sending his spot kick straight down the middle as Roman Weidenfeller dived to the right.

Henrikh Mkhitaryan forced Andrey Dykan into a smart save with a long-range shot, while the Krasnodar goalkeeper needed the help of the woodwork to keep out an effort from Adrian Ramos.

Ramos had beaten Dykan to a long ball but, having lifted the ball over the stranded keeper, the Colombian watched on as his attempt bounced off the turf and up onto the bar.

Headed chances for Ramos and Sven Bender also went begging just before the break, leaving Dortmund somehow trailing at the end of a first half they had dominated.

Tuchel's side continued to push for an equaliser straight after the interval, with even full-back Marcel Schmelzer trying his luck from distance with a volley that dipped just the wrong side of the post.

The same upright came to Krasnodar's rescue when keeping out Mkhitaryan's side-footed drive after 78 minutes, at which point Tuchel must have realised it simply was not going to happen for his team in front of goal.

Krasnodar's Brazilian forward Ari did waste a chance to make it 2-0 on the counter, dragging a left-foot shot wide, but Mamaev's early effort proved enough to extend the home side's European adventure into 2016.