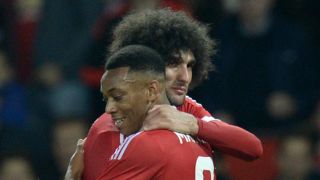 Marouane Fellaini has told Manchester United team-mate Anthony Martial that he still has much to learn in the Premier League despite an impressive first season in English football.

Martial arrived at Old Trafford for a reported £36million from Monaco in September and has been one of the brighter lights of an otherwise gloomy campaign for United, scoring eight times in 28 appearances.

The talented 20-year-old was hugely influential for the Red Devils on Friday, teeing up two of his side’s goals in a 3-1 FA Cup fourth-round victory over Derby County, but Fellaini claims Martial is not yet the complete package.

"He can be a good player, but he must improve," Fellaini told the Manchester Evening News.

"Anthony has a lot of quality; he is quick, a good dribbler and always dangerous. He is young and has to keep going, learn every day and he will be a good player.

"He’s settled in well, and enjoys the training and loves the Premier League, and loves playing games. So, first of all, this is good for him, but also the club.

"He must train hard and keep going as next season will be more difficult because the Premier League will know him. But he has the quality to be a success."