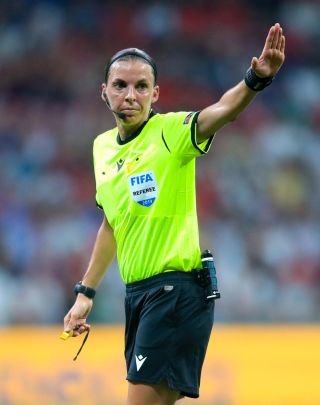 France’s Stephanie Frappart made history by becoming the first female referee to take charge of a major European men’s game in the Super Cup on Wednesday.

Frappart is the foremost female official in the world game having refereed the Women’s World Cup final in July as well as men’s matches in Ligue 1.

She was part of an all-female officiating team with assistants Manuela Nicolosi from Italy and Ireland’s Michelle O’Neill for the all-English clash between Liverpool and Chelsea.

Frappart’s appointment was welcomed by managers and players from both teams ahead of the match.

Chelsea’s Frank Lampard said: “It’s great news. I am very pleased to be a part of this moment in history. It is very much due.”

Liverpool counterpart Jurgen Klopp also described the appointment as overdue, saying: “I think it’s time. It’s the first one, it’s special, but I hope it’s not the last time.”

Reds defender Virgil Van Dijk, meanwhile, said: “Gender is irrelevant and if the quality is there – and it is because she’s been appointed to this game for a reason – then that’s fine. I think she deserves this game.”

Frappart had a comfortable evening with few flash-points or moments of dissent from players.

She did not issue a card until the 79th minute when she booked Chelsea defender Cesar Azpilicueta for a foul on Sadio Mane. Liverpool captain Jordan Henderson also went in the book for a foul on Emerson.

The Frenchwoman kept up with play throughout the match and will consider her night’s work a success.

First Christian Pulisic ran through before finding the net apparently to make it 2-0 to Chelsea but the flag went up to indicate the United States international was offside, which was confirmed by VAR.

Early in the second half, Chelsea appealed for offside against Roberto Firmino as he set up Mane for the equaliser but the flag stayed down and a VAR check showed the decision was again correct.

Chelsea then had another ‘goal’ chalked off when the flag went up to deny Mason Mount, another call that was supported by technology.

Frappart’s most contentious call came very early when an acrobatic effort from Mane hit Andreas Christensen’s arm but it was from very close range and no penalty was given.