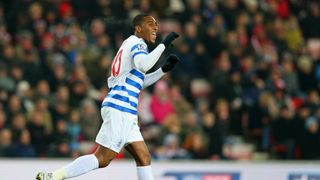 The Netherlands international was on target as QPR won 2-0 at Sunderland on February 10, but was replaced with 15 minutes remaining in that encounter after picking up a knee injury.

Chris Ramsey's men are two points adrift of safety with just five matches remaining and Fer is desperate to be involved in the remainder of QPR's Premier League run-in.

"I hope to be 100 per cent ready for the West Ham game," Fer told QPR's official website.

"I have already been doing some training with the first team, and I hope to be training fully with the group from Monday.

"West Ham is my target and I hope to be involved. I don't want to say how many minutes I will be able to play if I am involved, but I will try to do everything I can until I can't anymore.

"With just five games to go, I just want to throw everything into these games.

"It has been really frustrating to watch from the sidelines. We have played really well but only picked up four points in the games I have missed. You really want to be able to help the team, so it's been hard."

Fer has made 24 Premier League appearances since moving to Loftus Road from Norwich City in August, scoring four goals.