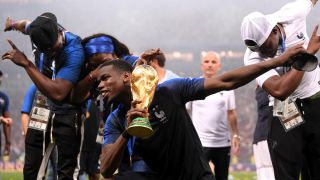 Former Manchester United defender Rio Ferdinand challenged manager Jose Mourinho to get the best out of Paul Pogba after he helped France win the World Cup.

Pogba enjoyed a strong campaign as France claimed their second world title with a 4-2 win over Croatia in Moscow on Sunday.

The 25-year-old midfielder, who scored in the final, has experienced a topsy-turvy two years at Old Trafford following his £89million arrival from Juventus and Ferdinand believes it is up to Mourinho to translate that international form to his club.

"Pogba was immense, especially second half. The pressure was on and he came to the fore," he told BBC One.

"It's down to Jose now to unlock this Pogba we've seen at the World Cup."

Pogba found himself out of favour under Mourinho last term, sparking speculation of a possible departure from Old Trafford.

The Frenchman scored six goals as United finished second in the Premier League.