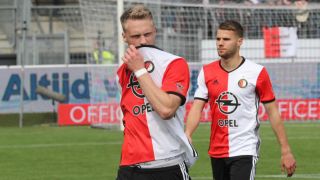 Feyenoord missed a chance to win the Eredivisie title as they suffered a shock 3-0 away defeat to Excelsior.

Giovanni van Bronckhorst's side, seeking a first title since 1999, could have ensured they held an unassailable advantage over closest challengers Ajax with just one match left to play.

But instead they suffered a stunning loss which, coupled with Ajax's easy 4-0 home win over bottom-of-the-table Go Ahead Eagles, means the title race instead goes to the final day of the season.

Feyenoord fell apart in the second half, goals from Nigel Hasselbaink, Stanley Elbers and Ryan Koolwijk earning fellow Rotterdam side Excelsior a shock triumph, which they celebrated joyously.

Feyenoord are now one point clear of Ajax with a superior goal difference, but have lost three of their last nine games in what has been a nervous finish to the campaign.

Van Bronckhorst's men get another chance to win the title next Sunday when they are at home to ninth-placed Heracles – a side who still have something to play for, given the Europa League play-offs are within their reach.

Europa League semi-finalists Ajax, meanwhile, are away to 12th-placed Willem II and must win to have a realistic chance of the title.

Ajax will be hoping for a better experience of the final day of the season after last year's nightmare.

They went into the final weekend of 2015-16 leading the league, only to lose out on the title to PSV as they failed to beat De Graafschap.