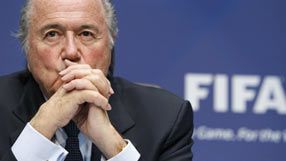 Two members of FIFA's executive committee, Amos Adamu of Nigeria and Reynald Temarii of Tahiti, have been provisionally suspended pending the outcome of the hearing into newspaper allegations that they offered to sell their votes.

FIFA's ethics committee, which is conducting the investigation and hearing, is also probing allegations of collusion between bidding nations, which would be against the rules.

A FIFA spokesman on Monday confirmed that the hearing had started but could not give any more details.

The committee, headed by former Swiss footballer Claudio Sulser, is expected to reach its decision on Wednesday although FIFA said in a statement that the verdict would be publicly announced in a news conference on Thursday.

FIFA's executive committee is then due to meet on Friday to discuss the outcome.

Only the 24 executive committee members have the right to vote when the two World Cup hosts are chosen in Zurich on December 2.

One grey area is that the ethics committee does not appear to have the power to kick members off the executive committee.

FIFA statutes state that: "An installed member of the executive committee may only be removed from office by the FIFA Congress."

However, the ethics committee may be able to get around that simply be extending the suspensions.

FIFA president Sepp Blatter has said that if either of the two men were suspended, they would not be replaced.

Adamu and Temarii were suspended after being accused of offering to sell their votes to undercover reporters from the Sunday Times newspaper posing as lobbyists for an American consortium.

Both have denied the allegations and expressed confidence that they will be absolved.

Blatter has questioned the newspaper's methods, accusing it of trying to set traps, and the organisers of England's bid to host the 2018 World Cup have written to FIFA distancing themselves from the reports.

The other candidates for the 2018 World Cup are Russia and joint bids from Spain/Portugal and Belgium/Netherlands.