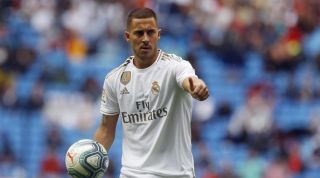 Fifty-five players have been shortlisted for a place in the team, which aims to select the best XI from world football based on performances last season.

The side has been voted for by 23,000 members of FIFPro, the organisation representing the interests of professional footballers across the globe.

The 11 winners will be revealed at The Best FIFA Football Awards show in Milan on Monday.

And AS write that no club – including Barcelona, Liverpool and Manchester City – will be better represented than Madrid.

Marcelo, Sergio Ramos, Luka Modric and Eden Hazard will all be recognised at the event, despite the fact that Madrid endured a disappointing season in 2018/19.

QUIZ! Can you name every FIFA World XI since 2016?

Hazard’s exploits for Chelsea were enough to earn him a spot in the XI, but the inclusions of Marcelo, Ramos and Modric will raise eyebrows after los Blancos finished a mammoth 19 points behind Barcelona in La Liga and crashed out of the Champions League in the last 16.

Barcelona duo Lionel Messi and Frenkie de Jong, who starred in Ajax’s Eredivisie triumph and run to the Champions League semi-finals, have also been selected by voters.

Liverpool centre-back Virgil van Dijk and Juventus forward Cristiano Ronaldo are among the others to have made the cut, although the identity of the remaining three players remains unknown.

However, Madrid are guaranteed to have more outfield representatives than the Reds, who will hope that Trent Alexander-Arnold and one of Mohamed Salah, Roberto Firmino or Sadio Mané feature within the 4-3-3 formation.

Andrew Robertson was also shortlisted but Marcelo has already claimed the left-back spot.