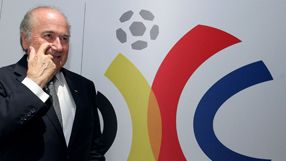 Football's world governing body also warned size could be a worry in the United States, Australia and Russia as it published its evaluation of the bids to host the 2018 and 2022 World Cups.

FIFA expressed concern that television income could be reduced if the 2022 tournament was held in the Far East or Australia and questioned the idea of co-hosting in a set-back for the Spain/Portugal and Belgium/Netherlands bids for 2018.

England, Russia, Spain/Portugal and Belgium/Netherlands are bidding to host the 2018 World Cup while Japan, South Korea, United States, Australia and Qatar are candidates for 2022.

FIFA's executive committee will chose both hosts in Zurich on December 2.

England's bid appeared to emerge almost unscathed from the report, receiving only minor criticism over training venues and team accommodation which applied to a number of other bids.

South Korea also looked in good shape apart from concerns with television rights which were shared with Australia and Japan.

"There is a risk of a reduction in TV income from Europe. The income from Asia/Oceania would need to be increased substantially to offset the likelihood of loss of revenue in Europe," said FIFA.

However, it is not clear how much influence the technical reports have because bids are also allowed to lobby executive committee members, something which could play a key role.

The reports were published the day before FIFA's ethics committee was due to announce its verdict on two executive committee members - Reynaldo Temarii and Amos Adamu - who have been provisionally suspended over allegations they offered to sell their votes.

FIFA is also investigating allegations of collusion between unnamed bids.

FIFA's summary on Qatar's bid began with praise for its green credentials and "novel approach" but said holding the World Cup in such a small country could be a problem.

"The fact that ten out of the 12 stadiums are located within a 25-30 kilometre radius could represent an operational and logistical challenge," said FIFA's report.

"Any delay in the completion of the transport projects could impact FIFA's tournament operations. Moreover, it appears to be difficult to test a transport concept prior to the event under conditions comparable to the World Cup."

But the midsummer heat appeared to be the real worry.

"The fact that the competition is planned in June/July, the two hottest months of the year in this region, has to be considered as a potential health risk for players, officials, the FIFA family and spectators, and requires precautions to be taken," added the report.

Hassan Al-Thawadi, chief executive of Qatar 2022, said in a statement: "The precautions referred to in the report have already been put in place with our proposed air-cooled solutions for stadiums, training sites, fans zones and oth