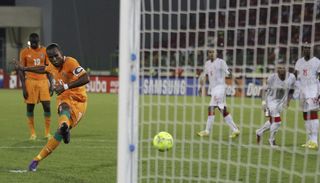 Captain Didier Drogba opened the scoring with a penalty in the fifth minute for the winners, and an own goal from Lamine Sane shortly after doubled their advantage.

Salomon Kalou coolly slotted a third just after half-time for the winners, and although Papiss Cisse netted an injury-time strike for the losers, Ivory Coast still won well.

They now have the upper hand in their bid to secure a place at next year's showpiece in Brazil, with Senegal to host the second leg on November 16.

Ivory Coast coach Sabri Lamouchi made five changes to the side that drew with Morocco last time out, with Didier Zakora and Sol Bamba headlining the inclusions.

Newcastle striker Cisse – who is Senegal's leading scorer in qualification – returned to the starting line-up for the visitors as one of four changes.

The winners made the perfect start, scoring after just five minutes when Gervinho was upended by Cheikhou Kouyate in the penalty area.

Drogba sent Senegal goalkeeper Bouna Coundoul the wrong way from the spot, and things went from bad to worse for Alain Giresse's side shortly after.

The lively Gervinho, who was a constant threat for the victors, raced away down the left, before aiming at a cross at Drogba from the left.

Sane deflected the cross into his own net though, sending a partisan crowd wild as Ivory Coast led 2-0 in less than 15 minutes.

Senegal did enjoy a good spell after, posing some questions for the Ivory Coast, but Gervinho should have scored a third six minutes before the break when he raced clear and rounded Coundoul.

Gervinho's effort was blocked by Lamine Gassama though, while Yaya Toure blasted over as Ivory Coast had to be content with a two-goal lead at half time.

The third goal did arrive though, with Gervinho setting up Kalou just after the break.

The Lille striker broke the offside trap and then kept his composure, sliding past the advancing Coundoul and into the net.

Yaya Toure almost added a fourth four minutes from time when his shot flashed just past the post before Cisse gave Senegal a late lifeline.

Ivory Coast failed to deal with a long ball pumped into the penalty area and Cisse reacted quickest, smashing past goalkeeper Boubacar Barry in the fifth minute of stoppage time.

The goal gave Senegal some hope, but Ivory Coast left the pitch the happiest after a convincing win.