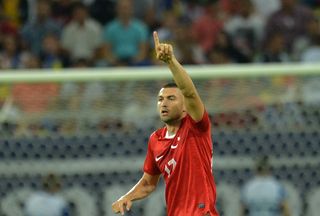 The Galatasaray strike duo scored in each half in Tallinn on Friday to ensure Fatih Terim's men took full advantage of Hungary's 8-1 hammering at the hands of the Netherlands, moving into the play-off spot in Group D.

The result means Turkey welcome Louis van Gaal's pool winners to Istanbul for their final qualifying game on Tuesday with their hopes of reaching the play-offs in their own hands.

Estonia boss Tarmo Ruutli made seven changes from their last qualifier - a 5-1 defeat in Hungary - with the likes of Gert Kams, Dmitri Kruglov and Sergei Zenjov coming in for the hosts.

Terim, meanwhile, opted for the same starting XI that won 2-0 in Romania last time out.

The visitors started the brighter of the two sides and deservedly went ahead through Bulut after 22 minutes.

Caner Erkin made a driving run from the left-back spot before standing a superb cross into the box for striker Bulut, who buried his header for his fifth goal in qualifying.

Estonia rarely threatened an equaliser in the remainder of the first period, but Turkey had to wait until the opening moments of the second half to double their advantage.

Gokhan Tore neatly diverted Bulut's flick-on into the path of Yilmaz and the forward equalled his club mate's tally for the campaign with an unerring side-footed finish past the helpless Sergei Pareiko.

Turkey then took their foot off the pedal but remained in complete control of the game, with Terim taking the opportunity to substitute the likes of Yilmaz and Arda Turan to keep them fresh for the vital clash with the Netherlands.