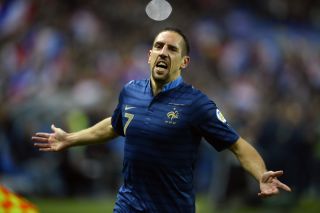 Didier Deschamps' men headed into the game three points adrift of Group I leaders Spain, and knew that victory would likely not be enough to see them qualify automatically.

France dictated for the majority of the game in what was a strong performance, but their efforts proved in vain as Spain's 2-0 win over Georgia ensured that the world and European champions topped the group.

Deschamps made just two changes from the side that side that hammered Australia 6-0 on Friday as Blaise Matuidi and Mathieu Valbuena replaced Yohan Cabaye and Loic Remy.

The hosts made a quick start to proceedings, Paul Pogba firing wide as Deschamps' men looked to seize the advantage early.

And it did not take them long to find the opener as Ribery cut inside on to his right foot before firing a magnificent long-range effort in off the bar, leaving Niki Maenpaa helpless.

France showed great attacking intent in the first half, and only the reflexes of Maenpaa prevented them from doubling their lead as he saved well to keep out Valbuena's header.

Finland were a danger on the counter, though, and France had captain Hugo Lloris to thank for preserving their lead, the Tottenham goalkeeper producing a fine stop from midfielder Kaspar Hamalainen one-on-one.

The visitors looked to gain confidence from that near miss, and they almost took the lead in spectacular fashion as Alexander Ring's improvised volley dipped just over the bar.

Still, Maenpaa was the busier of the two keepers, and demonstrated more wonderful reflexes to repel Olivier Giroud's point-blank strike after the Arsenal forward had latched on to Ribery's pull back.

France were almost made to pay for their profligacy early in the second half as Teemu Pukki shot wide following good link-up play with Hamalainen.

Deschamps' side found plenty of space in the Finland defence, however they were once again thwarted by Maenpaa, who performed further heroics to parry Mathieu Debuchy's fierce drive.

The second goal did finally arrive after 75 minutes when Toivio turned Giroud's header into his own net after the striker had risen to meet Debuchy's fine right-wing cross.

Substitute Remy hit the post with a header, before Cabaye wasted a gilt-edged chance to score, but a third arrived three minutes from time as Benzema hooked home Ribery's left-wing cross.

France will discover their opponent in the play-offs when the draw is made on Monday.