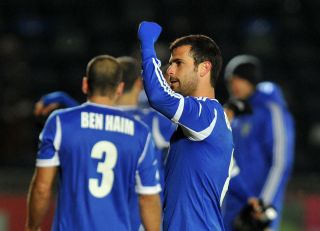 Neither side had any chance of qualifying for Brazil ahead of the game at the Ramat Gan Stadium, but there was still plenty to play for, with Israel coach Eli Guttman hoping to earn a new contract and Northern Ireland eager for their only away win in the campaign.

Israel, who were guaranteed to finish third regardless of the result, took the lead courtesy of Eden Ben Basat's sixth goal in Group F at the end of a disappointing first half.

But the visitors were far more threatening after the break and captain Steven Davis rescued a point with a clinical finish 18 minutes from time.

Israel coach Guttman made three changes to the side that drew with Portugal on Friday night, with Maor Melikson, Lior Refaelov and Ofir Davidzada promoted to the starting line-up in place of Elyaniv Barda, Omri Ben Harush and Maharan Radi.

There were six changes to the Northern Ireland starting line-up following their defeat in Azerbaijan, two of those coming at centre-back with suspended duo Jonny Evans and Gareth McAuley replaced by Rory McArdle and Chris Baird.

Northern Ireland striker Martin Paterson thought he should have had a penalty eight minutes in for a push from goalkeeper Dudu Aouate, but referee Laurent Duhamel say nothing untoward.

The visitors were forced to make a change after just 24 minutes when Corry Evans was on the wrong end of a heavy challenge from Sheran Yeini, who was cautioned, and Chris Brunt came on to replace him.

After a slow start Israel got into their stride and it came as no surprise when they took the lead three minutes before half-time, when the impressive Eyal Meshumar picked out Ben Basat with an inviting cross from the right and the Toulouse striker headed into the bottom-right corner of the net.

Northern Ireland defender Craig Cathcart and Israel's Dekel Keinan required treatment after a clash of heads early in the second half, with Cathcart playing on after being bandaged up.

Brunt almost equalised after 62 minutes when Israel allowed the midfielder to line up a shot with his dangerous left foot and his strike was deflected narrowly wide.

But Northern Ireland were level 18 minutes from time, when substitute Jamie Ward laid the ball off to Davis and the skipper fired into the bottom-right corner with his right foot from the edge of the penalty area.

And Paterson came close to winning it but his 77th-minute volley was straight at the advancing Aouate.